*tap tap tap* Is this thing on?

Its been a LONG time ... and so many things have changed ...

Google kindly remind me that I was about to lose this place so after I saved it, it seemed appropriate to see what it felt like to write here again.

Verdict?  I missed it.

The design work isn't quite done yet but I'm going to start posting on the new home full time now. Sadie will have the design done some time soon but I'm too impatient to wait for an official unveiling.

So, from now on please visit the following page instead:

(oh, and the few of you who have actually linked me, update me please...)
Posted by PrncessCat at 4:15 PM No comments:

It's been a busy weekend and I've had many an adventure...but my weekend has not yet come to a close so loyal readers...you must wait another day to read about my good times. My deepest apologies.
Posted by PrncessCat at 12:38 AM No comments:

I'm all for it...
I recognize that our country requires immigration in order to function at its best. We get a lot of smart people from other countries that contribute to research in our universities and labs. We gain a lot of labor in service industries. Truth be told, we don't have the population growth to reasonably support ourselves in the future (that and too many of the kids being born today will never make anything meaningful of themselves but that is a post for another day).
Immigration is what America was founded on - we are all descendant from an immigrant somewhere in our past.

JUST DO IT LEGALLY!

I'm on this rant because congress blows on this issue. Check out how amnesty is on its way to being granted to illegal aliens - Center for Security Policy

Giving amnesty to illegal aliens is absolutely ridiculous. It does nothing to reduce illegal immigration in the future. It does not allow us to 'know who is here.' It rewards illegal behavior and promises to do nothing more than drain away more of the precious resources we don't have enough of already. They are already spending your tax dollars in schools and hospitals because no one can be denied these services in America. Now you want to let them spend your tax dollars through assistance programs to lift them from the poverty many live in? Don't be fooled for a second to believe that they will contribute to the tax base - that is not going to happen unless their wages and/or job market are significantly expanded.

Immigrants are wonderful - when they are law abiding citizens like the rest of us. The rest of you, go suck the life out of some other country.
Posted by PrncessCat at 11:15 AM 1 comment:

At My Wit's End

This, my friends, is a seriously bitter rant. I don't even know what to do with these people anymore! The administrators of my program are certifiably the stupidest people on the planet.

I registered for fall classes this morning. Last night, it dawned on me that this was my task for the morning. So ... like a good student... I went on the school's website to make sure I had no conflicts and had chosen the right classes. I look and they have changed the times on some of the classes...those Bastards...way to notify..um...ANYONE? But that's not the worst part - the new 'band' that they have classes scheduled in is from 9:35 to 10:50. Why am I pissed about this, you ask? Lets break it down like the military - 21:34 to 22:50. Yes, that's right...these little dipshits think I should be in class at nearly 11pm? Have you completely lost your mind?

Oh, but the story gets better....I stayed up until 4:30 in the morning reworking it all only to find out this morning that the university wide computer system we use to actually register - that I was locked out of last night (since it was after 8pm) - doesn't reflect these new times. That's right IT DOES NOT HAVE THE NEW TIMES! So I had to redo things AGAIN to fit with the old way. What the ever lovin crap is going on here?

People need to get their stories straight and their info correlated before I go off and do something stupid...like get a lawyer...
Posted by PrncessCat at 8:02 AM 1 comment:

Despite never having met her or really commented much on Smash's blog, I've been following the progress of Mrs. Smash since she was thrown from the horse. Well, it has led to me doing a lot of thinking (I know, this can't be good...).

First of all, why is this affecting me so much? Probably because of the fact that they are from San Diego. I feel an immediate connection to anyone in San Diego. No matter how long I live on the East Coast I am desperately homesick for my beloved Pacific. Somedays I'm better at ignoring it than others. Most of the time I don't even realize that is what has tarnished the cheer in my day.

The second reason its affecting me so much is because I'm feeling a little stupid and foolish. You see, a while back I had a series of falls that ultimately left me with some serious back pain. One down a flight of stairs at a boyfriend's house (he's long gone from my life, btw). One down a flight of stairs at my parents house (which neither of them own anymore). And the final and most brutal, running start to a slip off the entryway tile onto my ass on the kitchen tile with my back hitting the single step between them. After the final fall I had the wind knocked out of me, lay on the floor gasping for air, and could do nothing but eek the word "mommy" as pain took over my entire upper body. I laid there silent, just happy I was able to breathe, with tears streaming from my eyes as I was unable to actually cry with such trauma just inflicted.

Normal people would have sought medical attention for such an incident. But not me. Coming from a medical family, I trusted their words. They chalked the emotional response up to the scare factor of it all. No X-rays, no MRI, not even a doctor's consult. I went back to college a few days later and my mom never said another word about it. For the next several months I was unable to rotate my upper body without experiencing intense pain. It often felt like I had an arrow piercing my body since the same place on my back and in my ribs would hurt if I moved just right. Eventually it healed on its own but I swear by all things holy, I am shorter because of it.

At the persistent urging of someone else, and for another injury, I went to see a chiropractor a few months ago. His initial exam revealed a compression fracture, albeit a healed one, that was jacking things up in general. I saw him a few times but he's in another city so I don't see him on a regular basis.
I've been too stubborn to find a chiropractor where I live and since its already healed I don't see much urgency. I just feel foolish for never having had the injury treated in the first place. I have the highest hopes for Mrs. Smash's recovery and wish I could do more to help her.
Posted by PrncessCat at 5:15 PM No comments:

I had never heard of this until yesterday. Does that make me a bad Scot or what?
Anyhow...as my contribution to the day, here are some pictures about the clan my family is to believe to descend from: 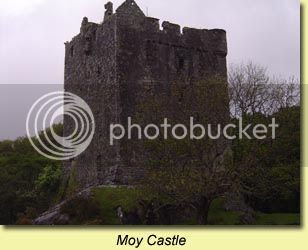 Our Badge & Motto: To conquer or die; yeah...that sounds about right for the stubborn little buggers in my family. We never give up on anything...

Posted by PrncessCat at 11:00 AM No comments:

There's nothing else to say. Fix it or shut the hell up.

The past couple of days I have been unbelievably tired and every few hours my stomach has violently threatened to mutiny as it practically screams, "Hello, woman! Its called food! Ever thought of sending any down?" I have lost all ability to focus and/or concentrate. My patience was out the window days ago. Yet, I don't understand why.

I've been sleeping. I've been eating.

I've gone past the semi-harmless grumpy to the much more malicious crabby. *scowl*
Posted by PrncessCat at 3:18 PM No comments:

I have tears in my eyes this morning as I write my first post...

The Indepundit, Citizen Smash, has experienced a personal trauma that no one could see coming. His wife was thrown from a horse yesterday and is hospitalized with a vertebral compression fracture and a small fracture in her pelvis. They say she will be ok, she's just in a lot of pain.
Having had a vertebral compression fracture I can speak from experience when I say they aren't fun. Go send them some love.
Posted by PrncessCat at 10:16 AM No comments:

I have access to the new blog (WOOHOO) but in preparation for my move posting here will probably be a little slow. Coming up with a new site design is kinda kicking my behind and my coding skills are rustier than ... well, we won't talk about that right now... (Helpful volunteers welcome)

Back to my multi-tasking
UPDATE: Who knew something so exciting could make me feel so stupid... *grump*
Posted by PrncessCat at 3:08 AM No comments:

Life is messy, we're made that way...

"Boundaries don't keep people out, they just fence you in... So you can waste your life drawing lines, or you can live your life crossing them." -- Gray's Anatomy


Perhaps this quote is something I should take to heart...but I think this can be taken to the extreme. Some lines are just stupid to cross for the sake of saying you did.
Posted by PrncessCat at 11:08 PM No comments: